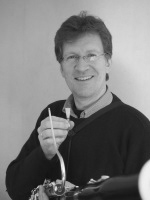 Dag Jensen was born in Horten, Norway and began bassoon lessons at the age of eleven with Robert Rönnes. He later studied with Torleiv Nedberg at the Norwegian Academy of Music in Oslo. He won his first orchestral position with the Bergen Philharmonic Orchestra at the age of sixteen and was promoted to co-principal of the same orchestra soon after. He continued to study with Prof. Klaus Thunemann in Hanover.

He was principal bassoonist of the Bamberg Symphony Orchestra from 1985 to 1988 and held the same position in the Cologne Radio Symphony Orchestra from 1988 to 1997. He is a member of the Saito Kinen Festival Orchestra and the Mito Chamber Orchestra, both with Seiji Ozawa as artistic director. From 2003 to 2005 Jensen was the principal bassoonist when Claudio Abbado founded the „Luzern Festival Orchestra“.

Chamber music plays an important part in his musical life, and he is a member of the Sabine Meyer Wind Ensemble and of the Ensemble Villa Musica. He is also a regular guest at several music festivals.

His artistic career is well documented on CD, with piano accompaniment as well as chamber music works and bassoon concertos.